The annual Doors Open Guelph event has been taking place in the Royal City since 2002. In conjunction with Doors Open Ontario, the Guelph Arts Council presents this year’s locations for Doors Open Guelph – and does not disappoint! From an 1850’s Al Capone brew spot to the brand new Brothers Brewery in one of the most historic buildings in Guelph, the magnificent 1855 residence of Reverend Arthur Palmer to a car repair garage built in 1950 – there is so much to explore from the inside out on April 22!

We thought we would give you our two cents of where to start and end the day, so here is our Doors Open Guelph schedule: 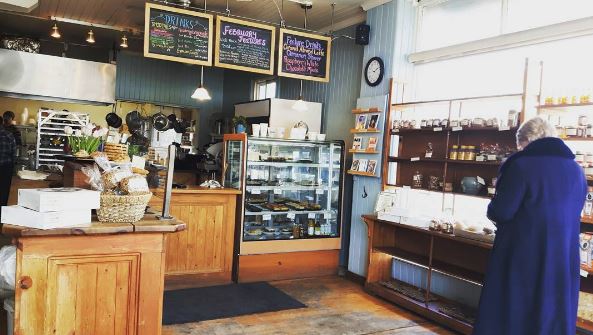 With The Grain: Start your Doors Open day with breakfast at With the Grain located in a converted charming old house. Delicious homemade baked goods finish off their twist on a traditional breakfast. 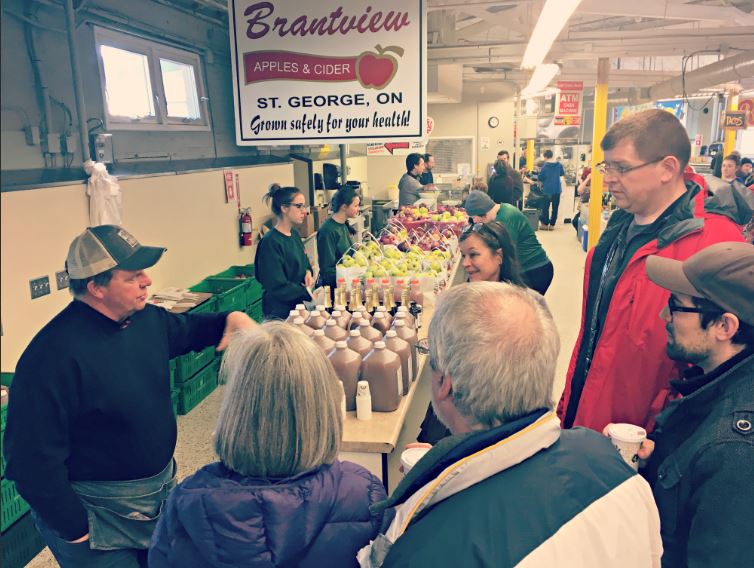 Farmers’ Market: Open at 7am every Saturday, you can start your day by perusing all that the Market Vendors have to offer! Grab a tasty breakfast sandwich, a samosa or even vegan waffles! 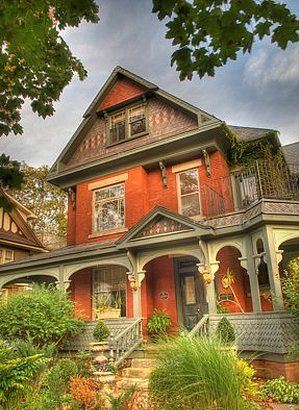 This unique house was built in 1893 for John Sully, a local businessman and politician. Many fine features remain intact, including the decorative slate roof, the leaded-glass windows and the original burled oak woodwork inside. The present owners have restored many of the original exterior and interior features. 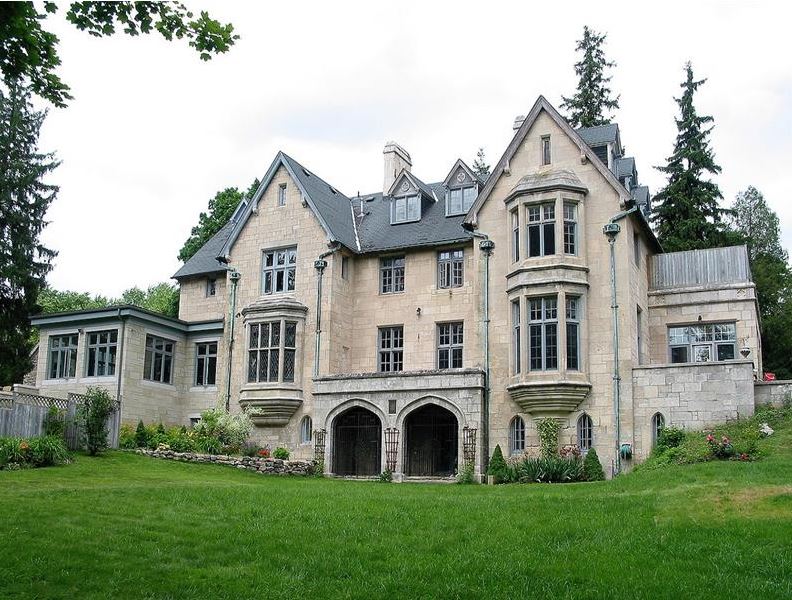 “Tyrcathleen” was built in 1855 for Reverend Arthur Palmer, according to plans attributed to Sir Charles Barry, architect of Britain’s Houses of Parliament. In 1926, H.B. Higinbotham enlarged the original house, remodelled the northern half, and renamed it Ker Cavan. The present owner has renovated and modernized the house and added his unique collection of sheep and soap artifacts. 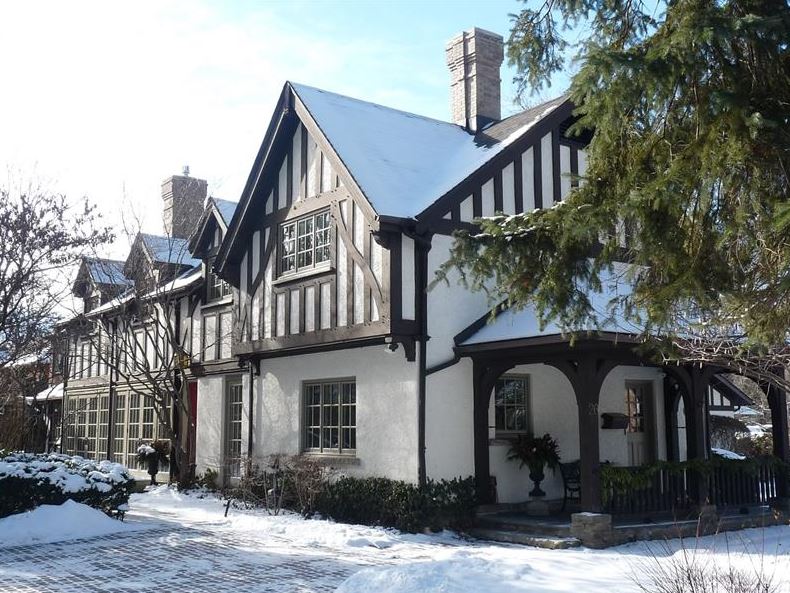 Henry Higginbotham added the coach house to the Ker Cavan property in 1928. It was built to house cars with living quarters above the garage for the chauffeur and gardener. A potting room and greenhouse were attached along Palmer Street. The garage doors are now windows, and the building has been renovated and turned into a residence. 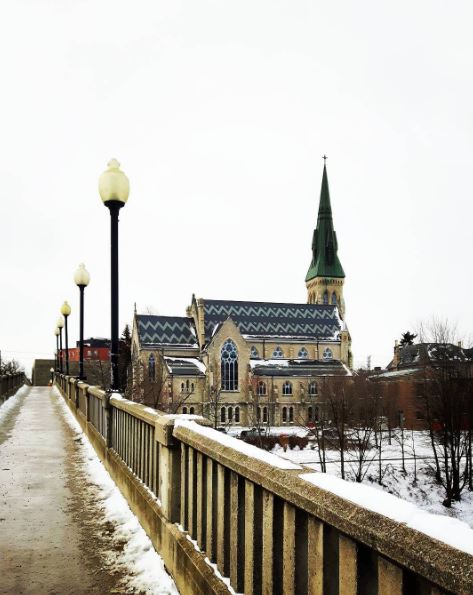 This church replaced two earlier churches in St. George’s Square. It was designed by Henry Langley, architect of many Ontario churches, including three in Guelph. A revival of the English Gothic medieval parish church, different roof lines indicate the different areas of the nave, choir and sanctuary. A special feature is the 23-bell carillon donated by Arthur Cutten. 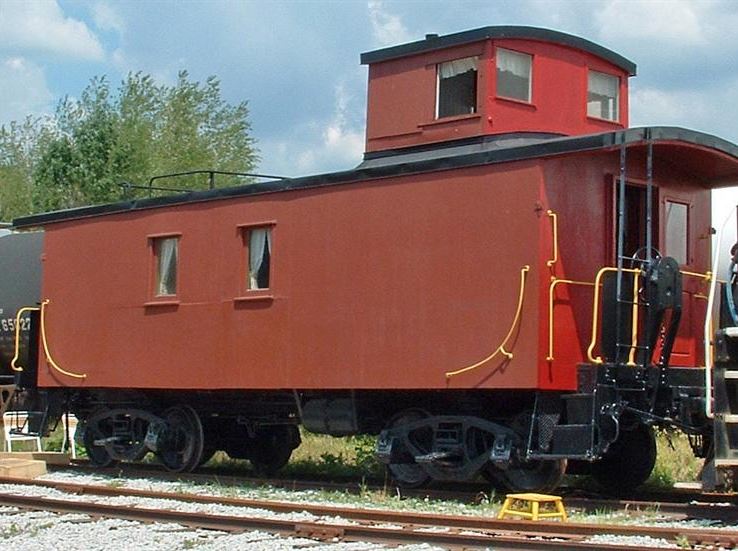 Built in 1941, this wooden-body caboose served the Canadian Pacific Railway for more than 40 years. Members of the Guelph Historical Railway Association have been beautifully restoring the caboose for the past 23 years, and recently completed the exterior renovation. Inside is now a railway museum on wheels, reflecting the glory days of railroading in the mid-20th century. 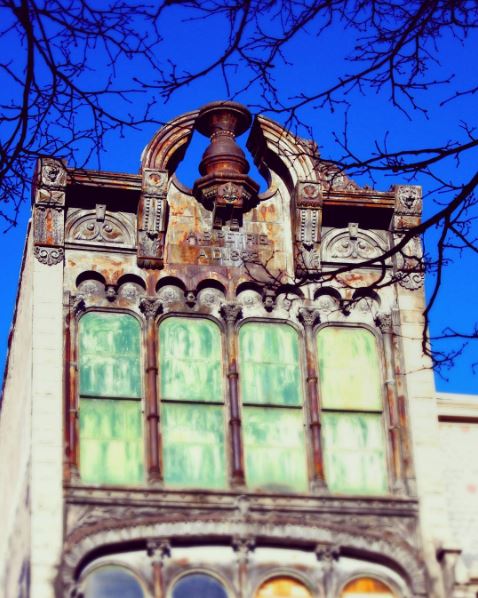 This Second Empire-style building was designed by John Day in 1882 for pharmacist A.B. Petrie. Constructed of limestone and timber, the New Petrie Building is one of only three remaining buildings in Canada with a stamped, galvanized iron façade. The upper floors were intact when Tyrcathlen Partners purchased the building. Restoration is ongoing. 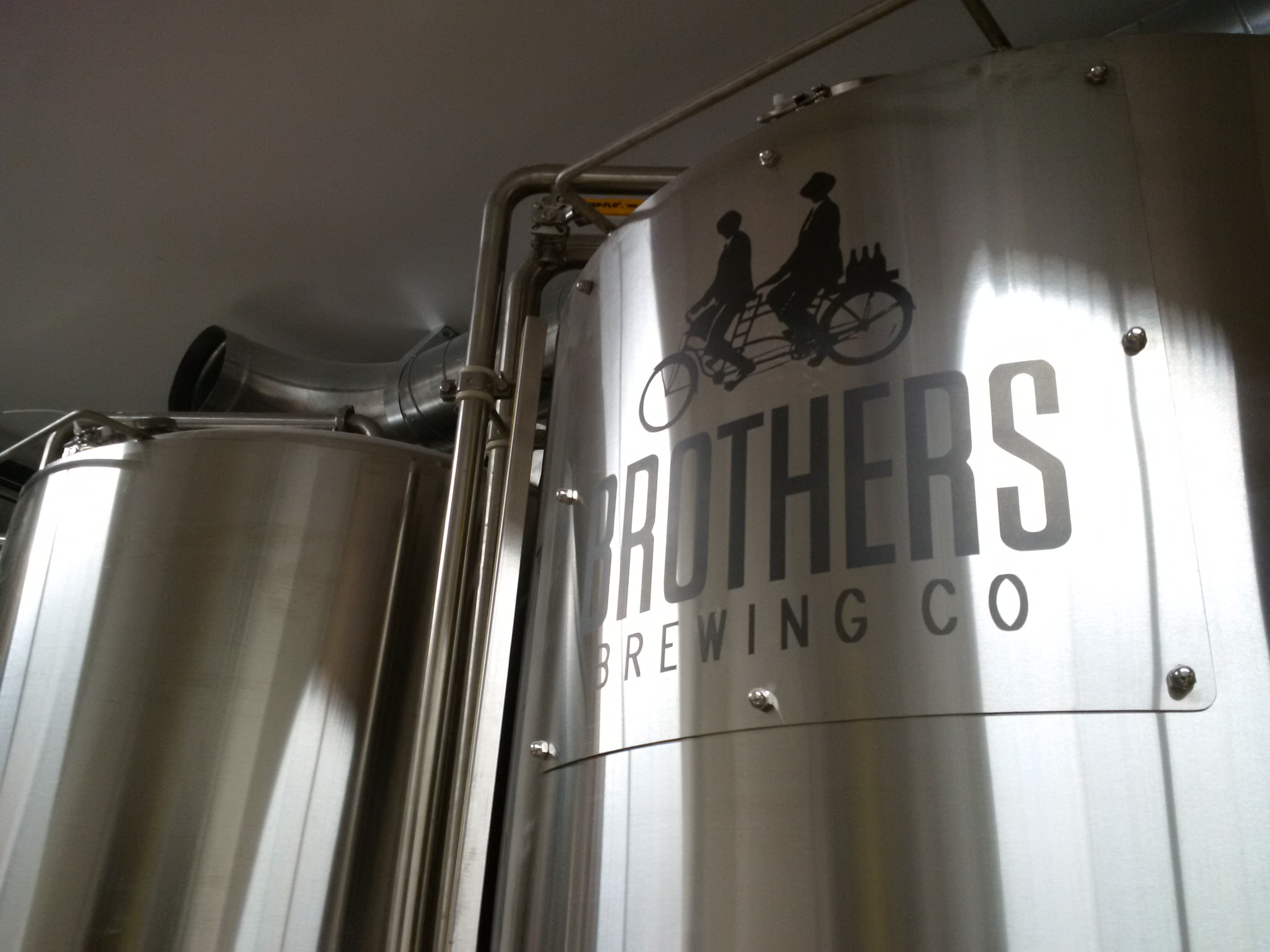 The ground floor of what was once A.B. Petrie’s Pharmacy, Tamblyn Drugs, and the Apollo Restaurant, is now a brew pub created by the Proveau Brothers. The beer flows from the brew tanks to a cooler and then directly to the bar taps. The décor features heritage elements, including tin ceiling tiles, Petrie formaldehyde bottles and the original Apollo furniture. 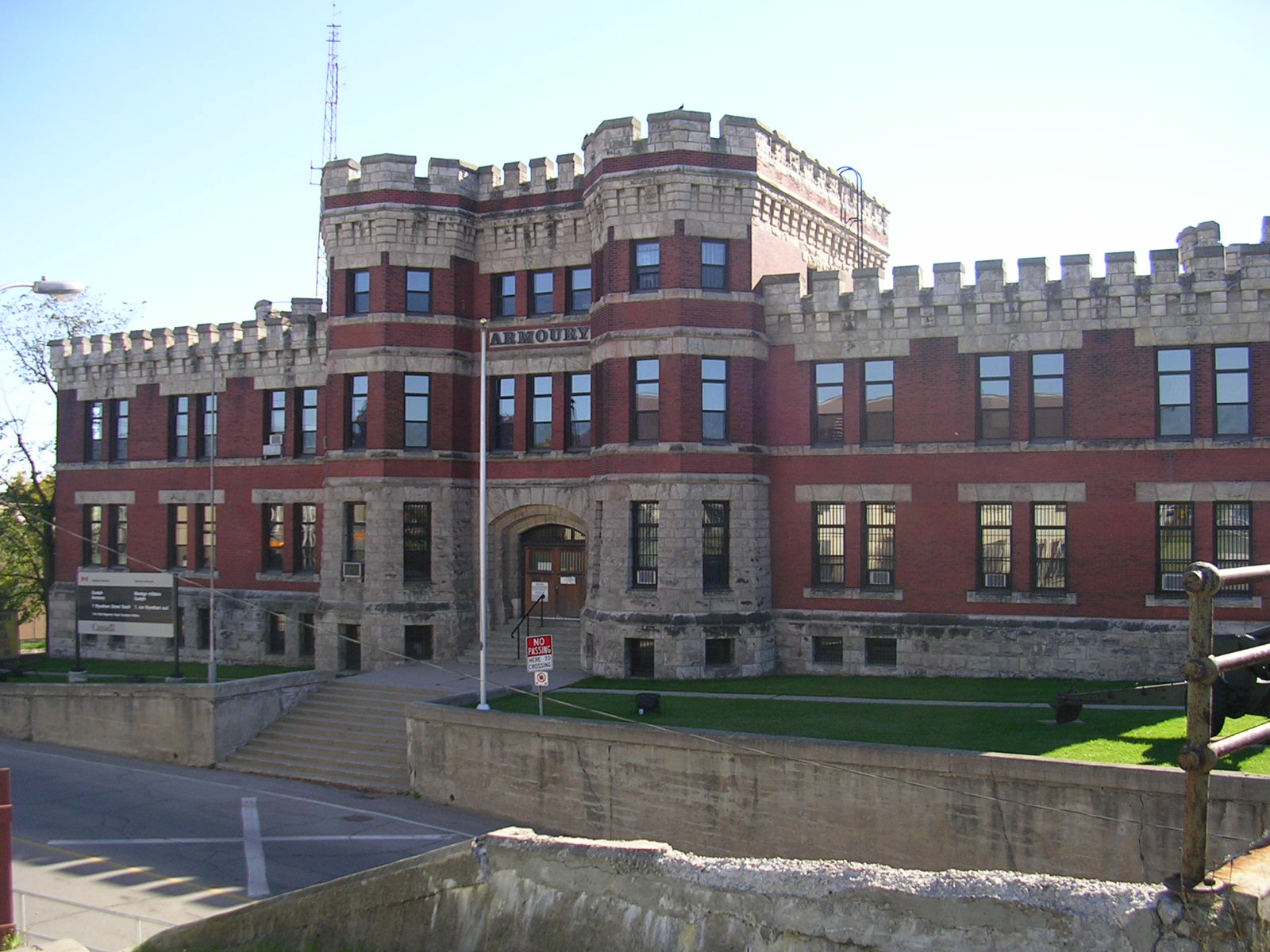 Constructed in 1909 of red brick highlighted with limestone trim, the Armoury was designed by architects David Ewart and T.W. Fuller. Its castellated towers, battlements and heavy gate give the impression of a medieval fortress. The Officer’s Mess contains a collection of art and memorabilia of the 11th Field Regiment, and the Armoury showcases the Regiment’s 160 years of service. 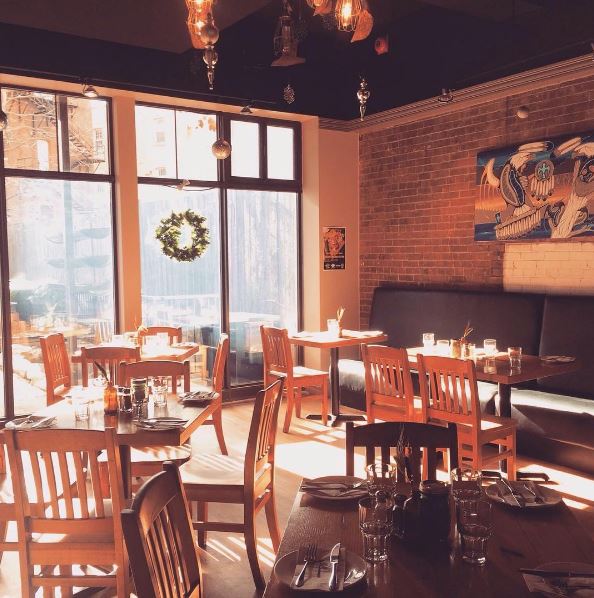 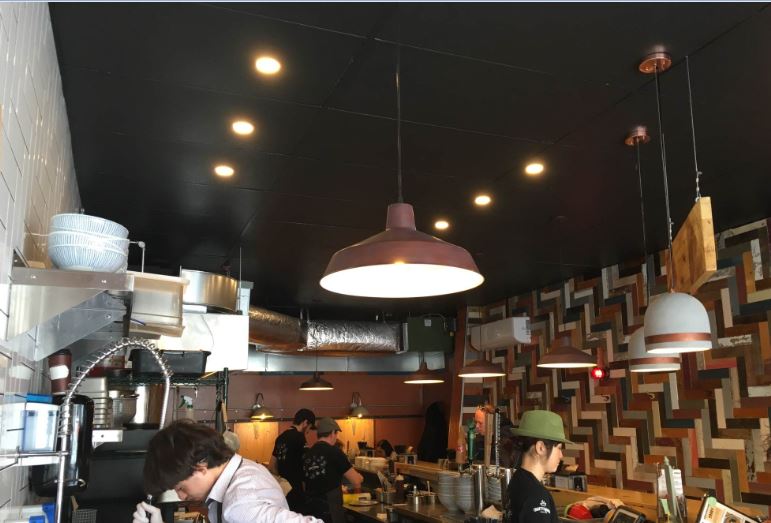 Crafty Ramen: Brand new and already making a name for themselves, The Crafty Ramen is known to sell out of their delicious ramen by end of day! Slurp your way through their tasty broth for a quick lunch! 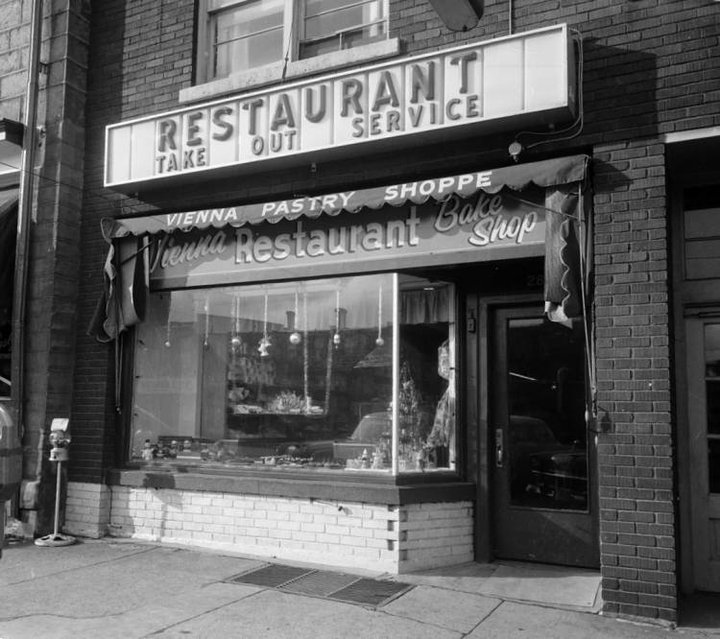 Vienna Restaurant: If you’re looking for a place where the food is great and the price is right Vienna Restaurant is the place to be! The Vienna is one of the oldest operating establishments in Guelph, Ontario, if not in Canada. The original Vienna was a bakery and coffee bar and dates back to the early 1900’s when it was originally located at 16 Macdonell Street! 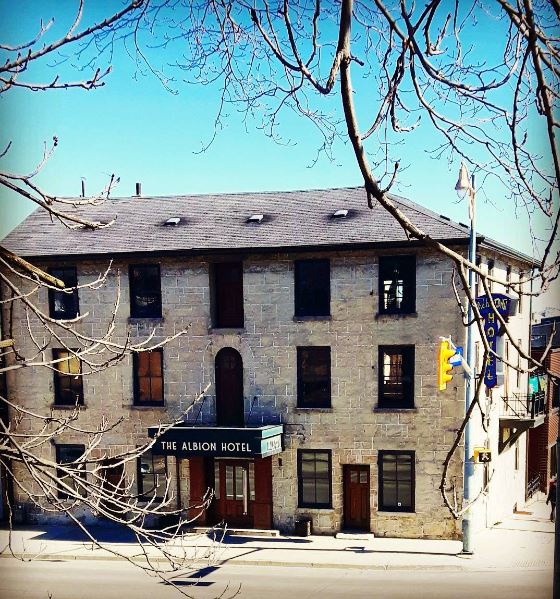 This building was made of locally quarried limestone in the late 1850s; its structure is supported by 18-inch timbers. In the early years, beer was made from water piped in from a spring on Catholic Hill. The entrance to the water tunnel can still be seen in the basement. Many spirited stories from the Prohibition era emanate from the Albion. 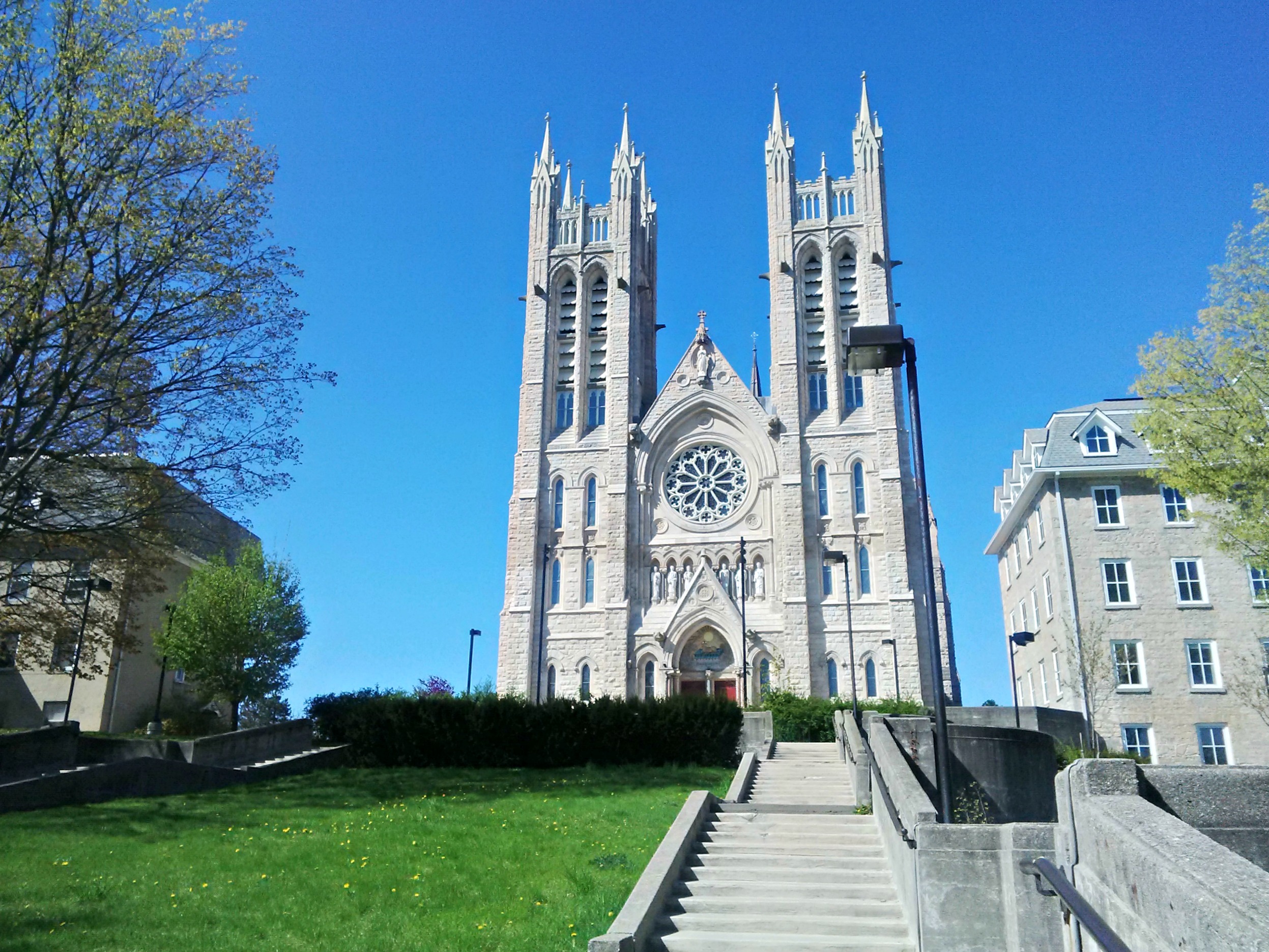 Basilica of our Lady

In 1827, John Galt selected the highest hill in Guelph for the building of a Catholic church. Opened in 1888, the church was designed by Joseph Connelly. It has many elements of traditional European cathedrals, with beautiful stained-glass windows, limestone walls and unique carvings. From 2006-15, a $12-million renovation restored the interior and exterior. 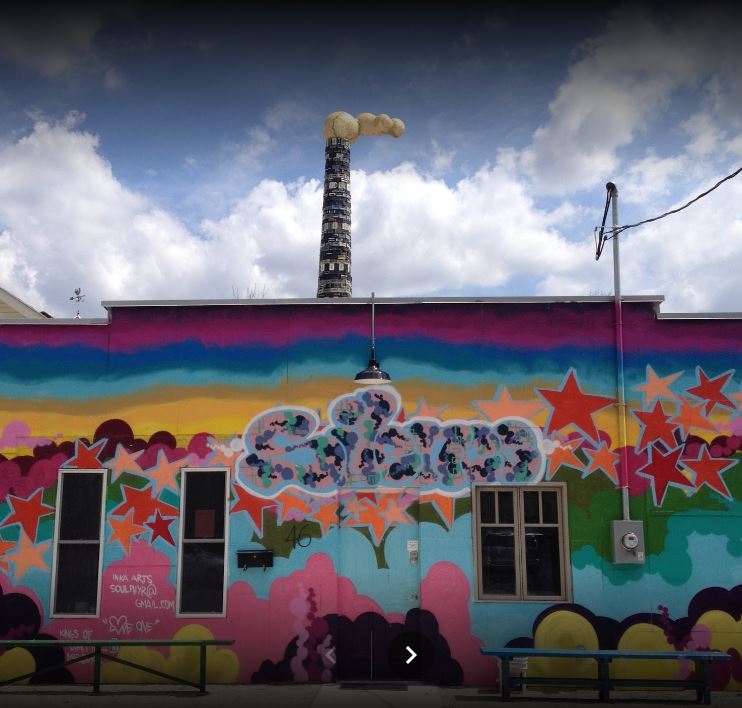 Built as a car repair garage in 1950, this space has housed several businesses. In 2015, new owners did extensive renovations to create an arts space. The main room is used for intimate performances and the Sound Sanctuary is used for music therapy and a collection of international instruments. The unique “cassette chimney” was created by Guelph artist Janet Morton. 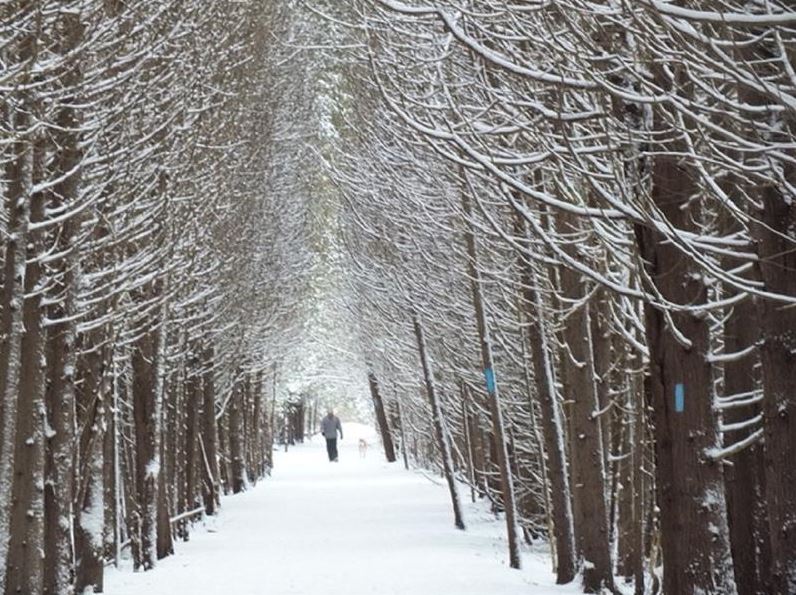 The most advanced inter-urban electric railway in North America arrived in Guelph on April 14, 1917 and ran for 15 years until 1931. Explore the railbed of the Toronto Suburban Railway (TSR), which is now a popular trail, a TSR powerhouse, and the area where the TSR brought a wetland to ruin. 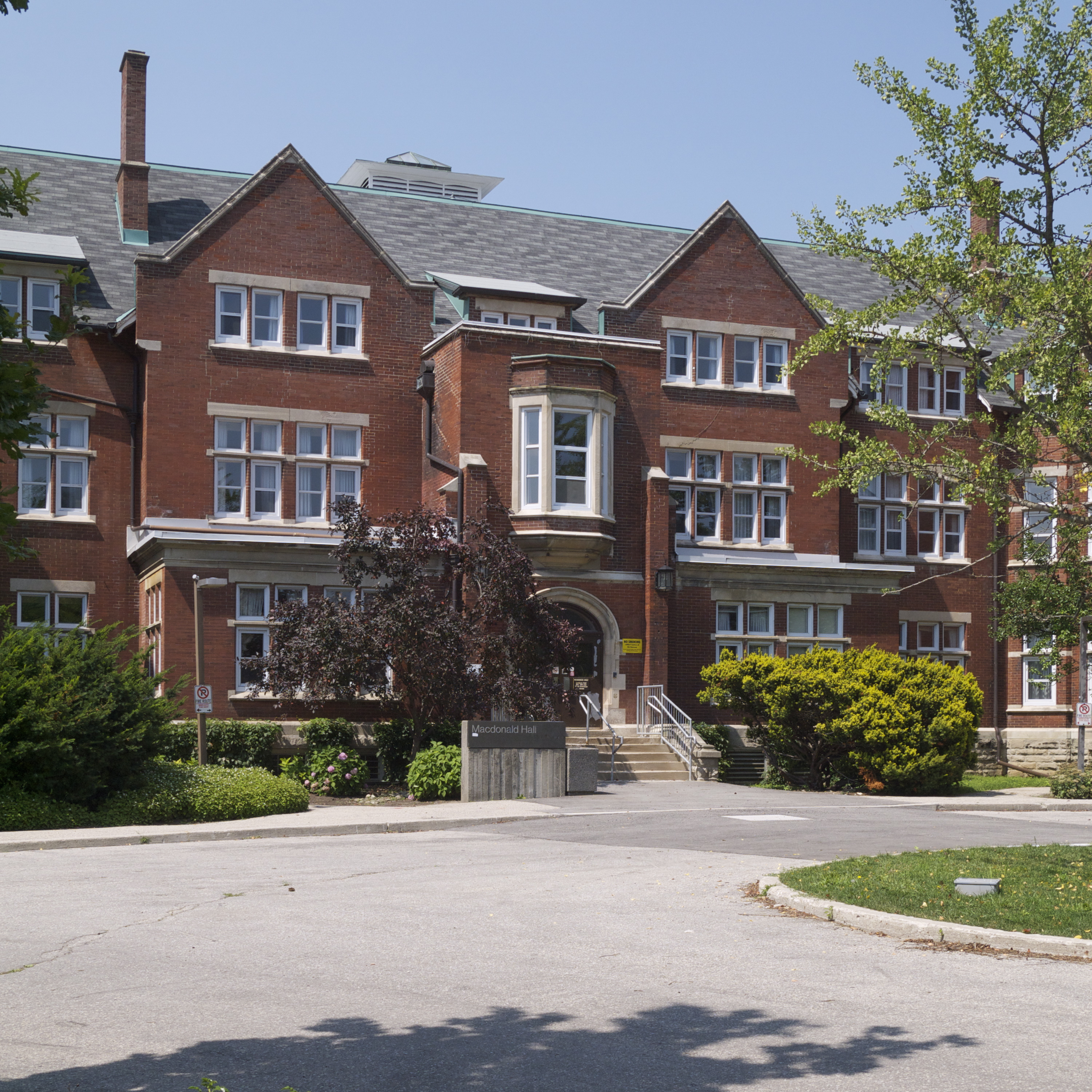 Macdonald Hall was built in 1903 as the women’s dormitory for students at the Macdonald Institute. Designed by George M. Miller, it is the oldest residence at the University of Guelph. It has now been renovated to meet LEED silver certification and the 1903 gymnasium and dining room have been transformed into modern learning areas, while keeping some original features. 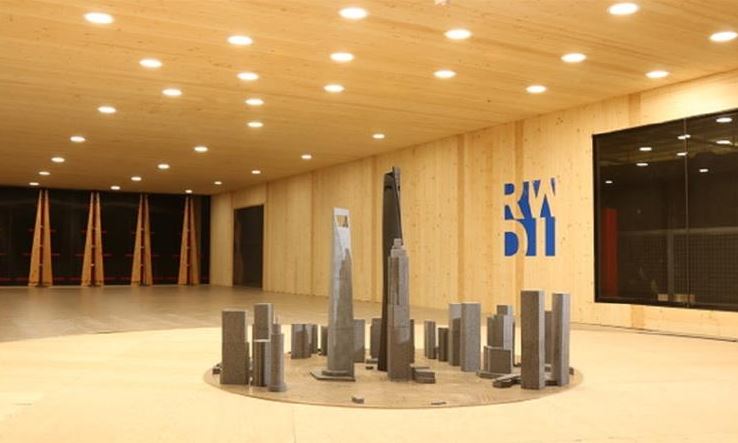 RWDI, a Canadian-based firm, tackles complex problems in the built environment with innovative thinking, collaborative problem-solving and a passion for expanding the boundaries of the possible. Climate engineering, building performance and environmental engineering work together to create buildings and infrastructure that are resilient, hospitable and sustainable. The Guelph headquarters feature state-of-the-art wind tunnels and a water tunnel. Closed-toe shoes required. 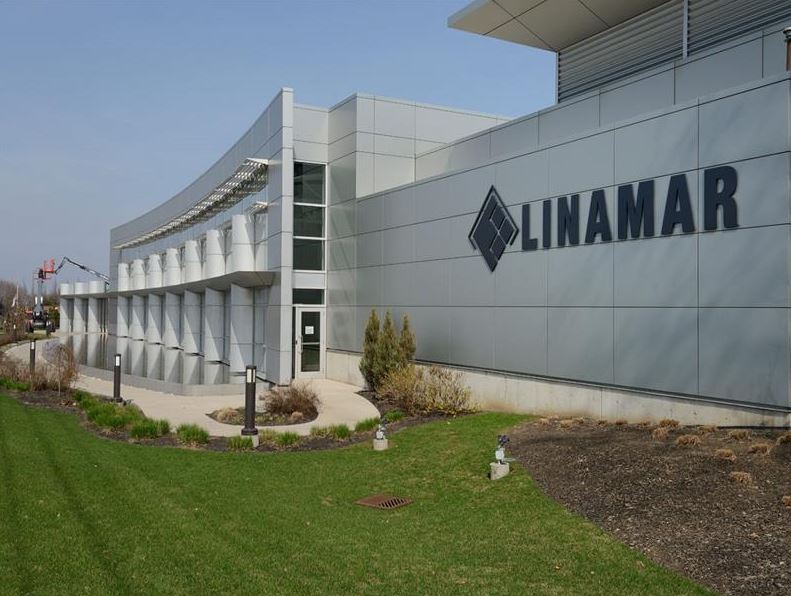 Linamar is a $5-billion company with 55 manufacturing facilities located around the world. This centre, named after Linamar’s founder, provides innovative product and process technology and trains workers in leadership and information. It features eco-friendly design elements – such as an open-concept atrium foyer, retractable skylights, extensive use of recycled materials, a reflective pond and dual living walls. 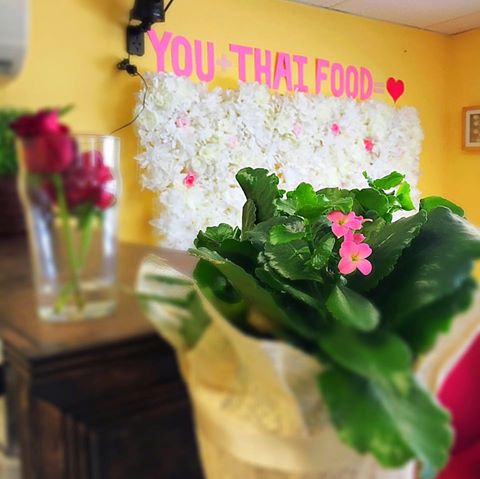 Na-Ha-Thai’s take out: The day of Doors Open discovery is over and it might be time for a break! Take out has never been better than at Na-Ha-Thai’s Kitchen. Authentic, delectable Thai flavours are what you will get with any order from Na-Ha’s. 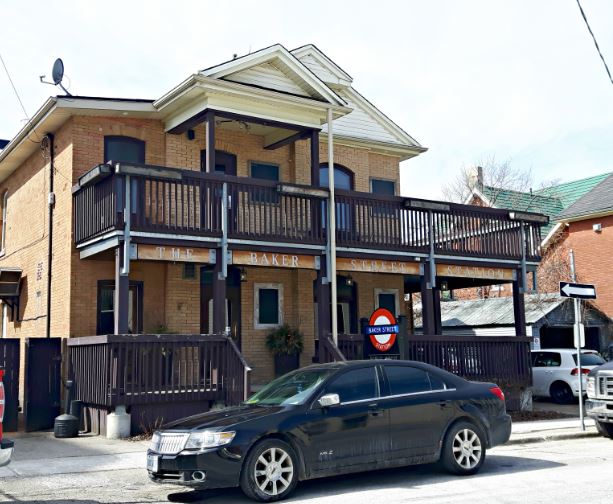